Here’s a species I hadn’t seen before – It was pretending to be a dead bud – Adam Dutkiewicz spotted it in a bush with scented flowers that looked like over-sized jasmine, but the leaves were stumpier, waxier and thicker (I am sure the plant wasn’t an indigenous species) – It was resting only a few leaves away from a Pink Flower Spider with green legs that was devouring a Honey Bee. Adam said his eyes were so bad he had to ask me over to confirm his suspicions that it was indeed a spider – It was so well-comouflaged that I needed to see it through the macro lens to be sure it was more than a blot on the foliage. Adam estimated it was about 2 centimetres long. Eriophoras change their colour and pattern as they moult to better blend with the rest position they hide in during the day – Consequently, it comes in a wide range of colours and patterns. It looks a lot like the other Common Garden Orb Weaver Spider, Eriophora transmarina, except the Knobbled species has characteristic spiny lumps; a cluster near its tail on the back of the abdomen and two larger ones higher up nearer the front of the abdomen. By Evening and night, these Orb Weavers take up a position in the centre of their circular webs and catch prey. They are very common in Southern and Eastern Australia and now have occupied New Zealand. 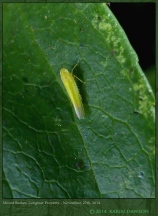 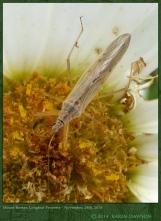 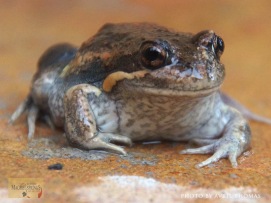